​BICC arrived in drips and drabs on Friday and Saturday morning, with the first arrivals being the sleepy Umer, Sid and Sam at about 8.30am. After a quick pitstop at the hotel, we headed to the Menorca’s stunning cricket ground. Friday saw Andorra CC play Menorca CC, with the help of the three BICC early arrivals. Andorra won the toss and decided to bat first, a toss decision that seemed as crazy as Nasser Hussain’s at the Gabba in 2002. Three further BICC players, Alex, Warren and Jeremy arrived soon after and promptly got the proper action underway, by heading straight to the bar…
With Umer deputising behind the stumps, Andorra were promptly bowled out for 82 in 26 overs. Following that much-missed part of cricket in the day-to-day life of a BICC cricketer, the tea break, Menorca set about seeing off the under-par total at a rapid pace, mainly thanks to James ‘JD’ Davies’ fine 65 (to go with his bowling figures of 3/11). They completed the win three wickets down in under 12 overs. With the match finished early, everyone sat down for a catch up and a refreshment or two! Unsurprisingly, JD picked up man of the match for his efforts, winning a bottle of Andorra CC’s very own wine. The weekend’s cricket had begun with great weather and great spirit, despite the one-sidedness of the match. It promised well for the rest of the weekend. As for BICC highlights from this match, Umer surprised with two catches behind the stumps (having dropped almost everything last time he kept for us) and Sid managed to take the easiest catch the world has ever seen against a 16-year-old girl (Vicky) playing her first ever cricket match.
The six BICCers were joined by Joe, and later by everyone’s favourite Australians, Damien and ‘Disco’ Stu, for dinner on the waterfront. We set about notifying the whole of eastern Menorca of our arrival by stumbling around the port until the wee hours of the morning.
Fortunately, Saturday morning brought about the arrival of our final two players, Shayne and our supreme leader and captain Mohsin. 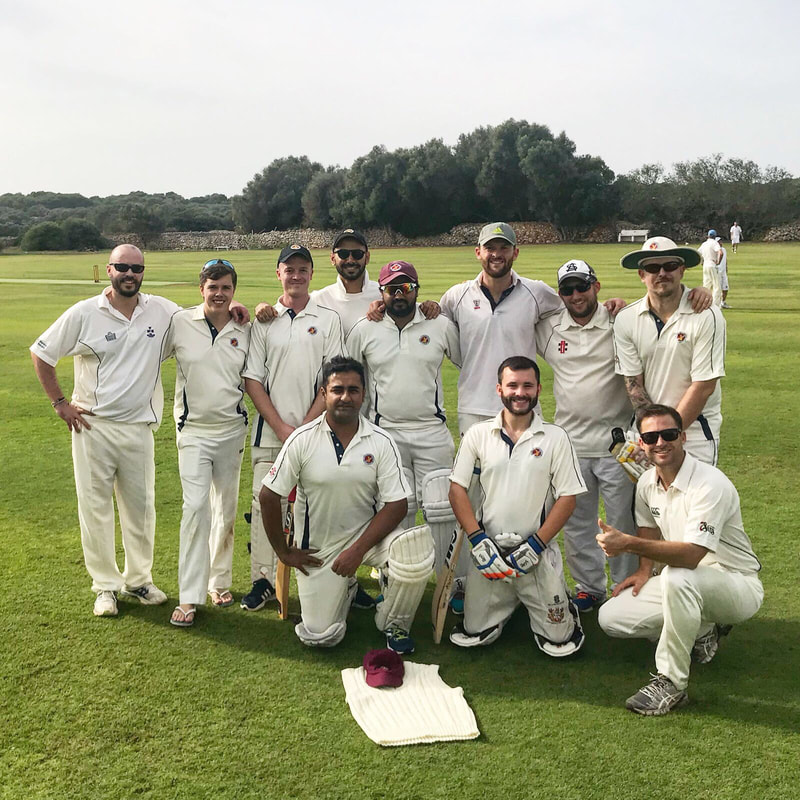 ​BICC’s first game of the weekend against Andorra. Such was the excitement of the two teams to play on a beautiful, grass (GRASS!) pitch that the match actually started before the advertised 12pm. At the toss, Mohsin declared that BICC would bat first and the deadly pair of Joe (14) and Alex (20) were sent out to open. The top five all got decent starts and set a good base. However, a mini collapse saw BICC go from 74-2 to 84-5 and then 104-6 after 24 of the 40 overs. Fortunately, the lower middle-order came to the rescue somewhat. Some good shots from Umer (29), Damien (54) and Mohsin (26*) allowed BICC to set Andorra an unlikely 225 to win, with BICC all out in the final over. It must be said that Andorra bowled well, with four bowlers each taking two wickets.
A wonderfully cooked cricket tea of steak and chips followed, before a pessimistic Andorra headed to the middle. Their first step was to see off the new ball threat from Mohsin and BICC debutant Jeremy. Some mean bowling from them (1-16 and 3-10 respectively) left Andorra struggling at 24-4, with the top order finding the pace and bounce from both ends difficult to handle. This fourth wicket brought Hepburn to the crease, fresh from top scoring for Andorra on Friday with 39. Captain Mohsin then rotated the bowling. There was no rest bite for Andorra though as Sam took a wicket in his first over. Hepburn (51*) again proved difficult to dismiss, but wickets at the other end were falling on such a regular basis that the Andorrans were finding it difficult to pad up in time. Sam (3-24) blew the chance for a hat-trick by bowling a full toss but it mattered little. Warren (2-2) came on to clean up the tail before Sid went one better than Friday by clean bowling Vicky to end the innings. BICC had won by 140 runs, with Andorra again bowled out within 25 overs. Being the positive bunch that they are, they at least clinged on to the fact that they had bettered their score against Menorca, having finished on 84 all out. The match had again finished relatively early, but nobody complained with plenty on offer at the bar! 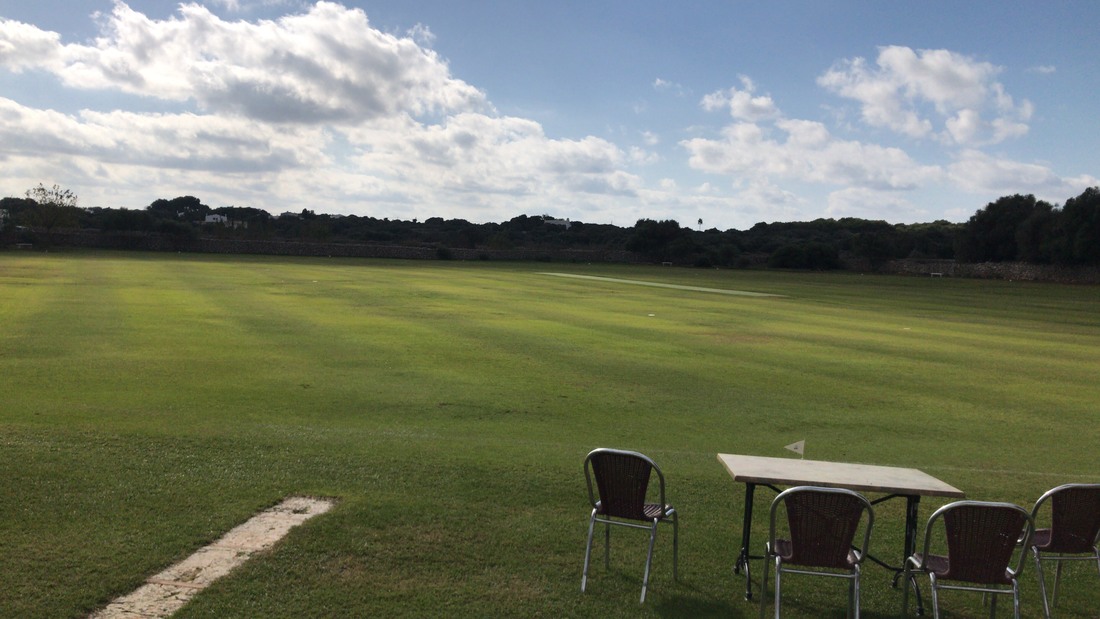 ​Some weary Barcelona and Menorca eyes turned up to the ground on Sunday morning to basking sunshine, a great relief from the forecasts of thunderstorms all morning. Whilst it had rained overnight, it was not a problem and the match was able to start on time. BICC won the toss and chose to bat, with the possibility of rain later in the afternoon still in the air. A different opening pair of Mohsin and regular Menorcan guest Umer (43) headed out to the middle attempting to win the eighth consecutive meeting between these two teams. With the score on 67-1 following a 50 partnership between Umer and Sid (25), Umer was “controversially” given out LBW, with the opening batsman the only person complaining. Eventually it fell to a hungover middle-order of Stu (49*), Warren (30) and Jeremy (17) to guide the score resembling something a good score. BICC reached 187-9 off their 40 overs.
Over tea, both teams were optimistic of their chances, although BICC realised they would have to bowl well and take all their chances to win the game. And, to quote every clickbait story ever, you’ll never believe what happened next…
The first wicket fell to Jeremy on just the fifth ball. This brought the dangerous JD to the crease, albeit momentarily as he called a suicidal run and was run out by a combination of Joe and keeper Alex’s efforts. With the score on 1-2 and following two maiden overs, Menorca were beginning to feel the pressure, and in just the fourth over Mohsin picked up another wicket. After six overs Menorca were struggling on 2-3, but Jeremy was about to make it worse with another wicket. Mohsin took himself off after four maiden overs and impressive figures of 1-0. Unfortunately for Menorca the torture wasn’t about to end there, as, like on Saturday, Sam got a wicket in his first over. The score was now 7-5 after ten overs, and now it was surely a forgone conclusion. Another wicket fell to Sam in his second over, but this brought barman Jeff (30*) and Andorran guest Mike (14*) together. The two of them batted well, forming a wall in front of the stumps that their teammates had been unable to do. That being said, there were still plenty of near chances, and swings and misses but BICC were unable to make another breakthrough, despite the attempts of Sam, Joe, Stu and Warren. As the innings progressed, the rain fell harder and harder, and at just after 3:30 the umpires took the players off. Unfortunately, it wasn’t long before the game was abandoned, with the rain continuing to fall and an already slippery Astroturf wicket only getting worse. Following some calculations online, it was confirmed that BICC had won the game, even on the Duckworth/ Lewis method. After 24 overs, Menorca reached 65-6 with the par score being 127. This meant that BICC had beaten Menorca again, this time by 62 runs, making the overall score 8-0. Hopefully next time they can give us a bit more of a game(!), although well done to Jeff and Mike for batting 12 overs in difficult conditions and showing up their teammates.
And so concluded our weekend away, getting wet but with two victories from two games. A big thanks to everyone at Menorca who makes it possible and for inviting us for a fourth time. We always feel so welcome and you are such terrific hosts. Thanks also to everyone at Andorra for playing in the right spirit and for being a great laugh. Here’s hoping we can host each other one day soon. 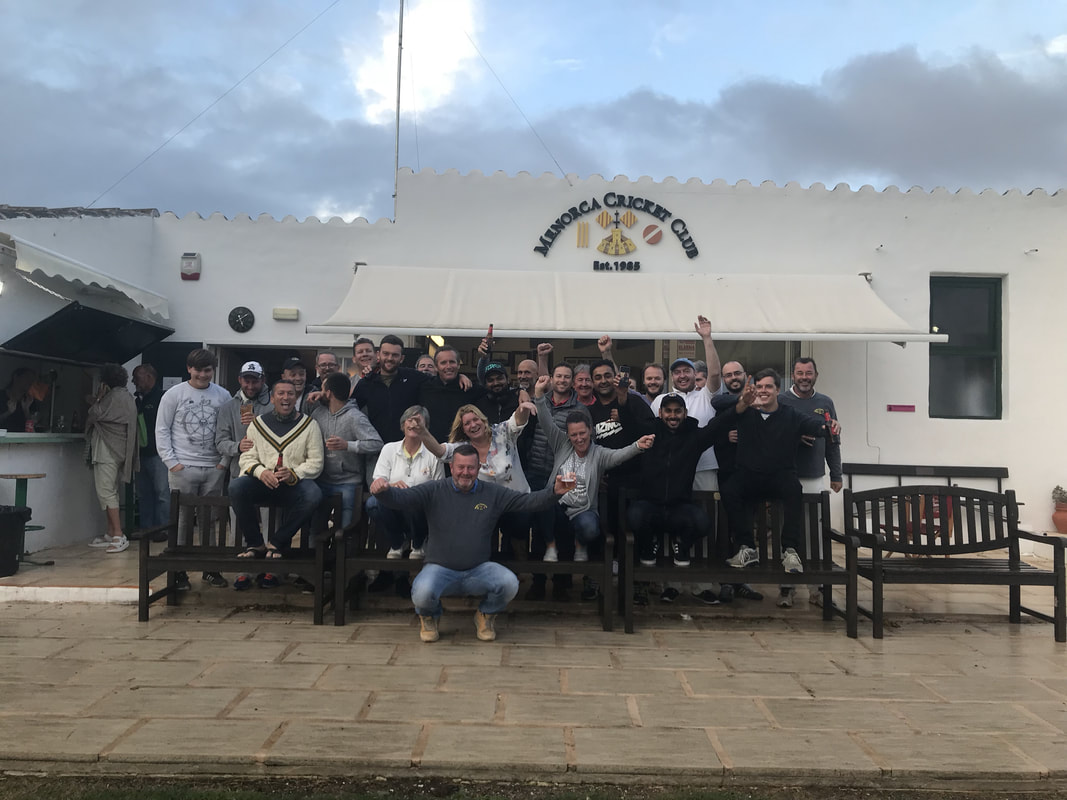 “To stay in, you’ve got to not get out.” GEOFF BOYCOTT